DECATUR COUNTY, Tenn. — Judge Creed McGinley said during a Wednesday status hearing that the anticipated trial date is April 3, 2017, for the three men charged in the disappearance and death of Holly Bobo. 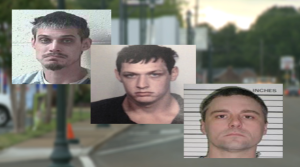 It has not been determined whether all three defendants will be tried separately, but the 2017 date is anticipated for a first trial.

Brothers Dylan and Zach Adams along with Jason Autry are charged with kidnapping, raping and killing Bobo. Dylan Adams and Jason Autry were present at the Wednesday hearing. Zach Adams was not but was represented by his attorney.

Prosecutor Jennifer Nichols said the state wants to try Dylan Adams separately because of previous statements he has made regarding the other suspects.

“We’re asking simply to sever them, one from the other, so it can be tried the way it needs to be tried,” prosecutor Jennifer Nichols said.

Prosecutor Jennifer Nichols said the state wants to try Dylan Adams separately because of previous statements he has made regarding the other suspects.

Status hearings will continue to be held at the Decatur County Courthouse, but a venue for the trial has not been set due to the high-profile nature of the case in the community.

Attorneys previously have said there is about four terabytes of data for discovery in the case — an enormous amount of information one defense attorney said, if printed, could fill four courtrooms full of boxes.

“The state, the TBI, has been investigating this case for years. Then all the sudden in a short amount of time, they come up with these three individuals as suspects,” Scholl said.

The family of Holly Bobo says they’ll wait for justice as long as it takes.

“Whatever it takes, however long it takes, the family of Holly Bobo remains committed to having justive for their beloved daughter,” Family Pastor Don Franks said.