HARDIN COUNTY, Tenn. — Eyewitnesses report seeing a dead woman’s body next to a Hardin County business. However, deputies have not confirmed whether there was a body or if they are investigating. 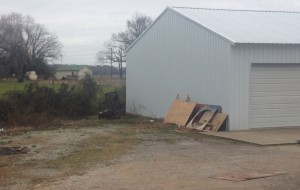 “There’s a white sheet laying on the ground up there, and she’s half uncovered,” Amanda Brumley said. “It was kind of odd because that’s not something you see here.”

Brumley lives close to where her husband says he saw the body.

Employees at AmeriPride Manufacturing, who did not want to be identified by name, said the woman’s body was found around 6 a.m near the side of their business.

The manufacturing company makes restaurant equipment and typically doesn’t open until 7 a.m. “I’m proud that I didn’t come in early,” an employee said after revealing a co-worker discovered the body laying on a pile of debris next to the building.

Residents who live near the scene say drug use is common in the area and that they are not ruling out the idea the body may have been dumped near the business.

“I have small kids that get on the bus around here, and for a lot of sketchy things to be happening — it’s really scary,” Brumley said.

During our investigation, we made phone calls and stopped by the sheriff’s office to inquire about the alleged discovery. Our crew was told by personnel we would need to speak with Sheriff Sammy Davidson who would be out of the office for an unknown amount of time.

Our phone calls have not yet been returned.