JACKSON, Tenn. — A recent mission to save several animals in Decatur County has local shelters asking for the community’s help. 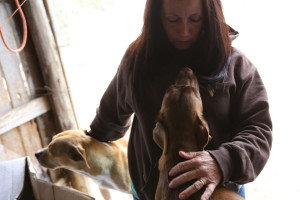 Redemption Road Rescue worked an entire evening in Decatur County to save a horse whose owner said could not get off the ground.

“We received a phone call from a neighbor who was in contact with the owner of a horse,” Rescue Road Rescue director Lori Collins said. “The owner actually sought help. He had a horse that was down that was not able to get up.”

Rescuers say the horse, who they called Perry, suffered from malnutrition and that his kidneys were shutting down.

“He was just essentially in organ failure, and he didn’t make it,” Collins said.

The owner who reached out about Perry also surrendered three horses, two mother dogs and 11 puppies.

RRR contacted Compassion Pet Rescue to take in the dogs,

“The mother was very dehydrated, very malnourished,” foster volunteer Katherine Neihoff said. “She had not had the adequate food that a mother needs to nurse that many puppies.”

While the initial rescue of the horses and dogs is over, both rescues say they also need the community’s help in the recovery of these West Tennessee animals.

“It’s physically, financially and emotionally overwhelming sometimes, and we need the help from the people around us, from the community,” Collins said.

The rescuers said no charges were filed against the owner. They said he was just unable to take care of the animals.

The animals will be up for adoption once they are fully recovered.