JACKSON, Tenn. — IHOP restaurants across the country gave away free short stacks of buttermilk pancakes Tuesday for a good cause. 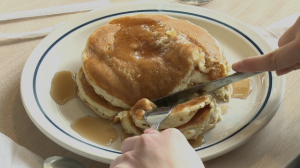 Rachel Bernui dined with friends at the IHOP in Jackson. “Free pancakes. I’m in,” she said. “I’m a college student, so any time there’s free food I’m in there.”

Instead of charging customers, IHOP asked people to consider donating to Children’s Miracle Network Hospitals. “I think it’s awesome,” Shelby Kee, a diner, said. “I think it’s a really good incentive to get us out there.”

A short stack of pancakes costs $5.99. Workers at the IHOP in Jackson said they have seen people give a few dollars and some as much as $20.

IHOP said it has raised nearly $20 million for charity since starting its National Pancake Day celebration in 2006. The company said this year they hope to raise $3.5 million.

“We do it always with pleasure,” Erick Cuevas, who manages the IHOP in Jackson, said. “This isn’t something we do for ourselves.”

Bernui was pleased with the pancakes and said she planned to make a donation. “They were delicious,” she said. “Probably the best pancakes I’ve had in a long time.”

Cuevas said they brought in extra staff to accommodate the crowd.

Diners can get a free short stack of pancakes until 7 p.m.