Bill would set rules on transgender student bathroom use

JACKSON, Tenn. — A new proposal in the state legislature would designate which bathroom transgender students can use. The American Civil Liberties Union of Tennessee said the bill is unlawful discrimination. 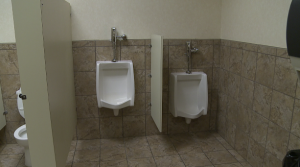 The bill would require students to use restrooms and locker rooms in schools based on the sex indicated on their birth certificate.

Tom Castelli, legal director for ACLU of Tennessee, called the proposal a direct attack on the rights of transgender students. Castelli said the group is already at risk for bullying. “You’re just enabling that bullying and that atmosphere of inequality for those particular students,” he said.

Others said they do not want their little ones sharing a bathroom with someone who is biologically of the opposite sex. “Well, I wouldn’t want one walking in on my granddaughter,” Sandra Ostrom, of Bolivar, said. “I mean, you never know what’s going to happen.”

“The way you’re born is the way you should be,” Strickland said.

The bill would affect public schools and universities.

State lawmakers are scheduled to take up the issue March 15.