WEAKLEY COUNTY, Tenn. — Some roads in northwest Tennessee were starting to disappear under rainwater Thursday afternoon. 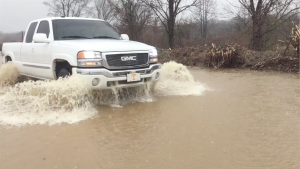 Roads on the Weakley and Obion county line were inches under water, and some areas off of Highway 22 were starting to see large amounts of ponding.

“Really overnight if it starts draining off it will be around the rivers and won’t be the roadways as much, but some tributaries might back up a little bit,” Weakley County EMA Director Jamison Peevyhouse said. “So in the morning when you start traveling, slow down as you approach bridges. Make sure there isn’t water over the road.”

Officials are expecting another inch of rain in the area overnight.