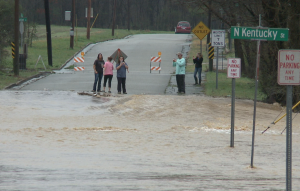 From bus drivers to flooded cars, we found no shortage of road hazards while out driving through Jackson.

“It’s hard to get through some roads. I’m surprised they haven’t closed them,” driver Chastity Long said.

But several roads across the city did close.

It appeared no single area was free from the floods, especially a portion of road between Tennessee and Kentucky streets in south Jackson.

“The water just ain’t got anywhere to go. The creek down here is full, and when it goes down, the rest of everything else will go down,” said George Barnes, director of stormwater operations in Jackson.

He says one common sight Thursday is overflowing drains. Barnes says it’s because the rain is falling too fast for the drains to keep up.

“Once the ditches and everything get full, you just got to watch it and make sure drivers stay off the water on the street,” Barnes said.

“We expected some rain but not to go outside and be up to your waist and not be able to move around and that kind of stuff. But yeah, it’s definitely nasty,” Long said.

Nasty enough outside to close Jackson-Madison County Schools early. Middle and high schools let out at 10 a.m. while all others dismissed at 11 a.m.

While some drivers followed the warning signs and turn around, Barnes says others needed a reminder. “If you can’t see the street, don’t get on it,” he said.

First responders say they anticipate the flooding to get worse overnight.