WEAKLEY COUNTY, Tenn. — A former Martin police officer has been arrested in the alleged theft of around $18,000 from a bank account established to benefit Anna Kate Wenz. 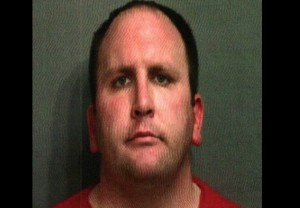 Guy Pryor, 34, of Martin has been arrested and charged with theft over $10,000, according to a Tennessee Bureau of Investigation release.

Investigators say the money was stolen from an account for the “Day for Anna Kate” fundraising campaign, which was organized to help the family of 2-year-old Anna Kate Wenz.

The 2-year-old passed away March 2 after nearly a yearlong battle with cancer.

The bank account was established by Pryor who until recently worked for the Martin Police Department, according to the release.

Financial records showed that someone had withdrawn funds from the account on several occasions in 2015. TBI investigators and the Martin Police Department determined Pryor was responsible for the thefts from the account, according to the release.

District Attorney General Tommy Thomas requested the assistance of the Tennessee Bureau of Investigation on March 4, according to the TBI.

Deputies with the Glynn County Sheriff’s Department in Georgia assisted the TBI in arresting Pryor on Friday. He is being held in the Glynn County Detention Center awaiting extradition to Tennessee.