MADISON COUNTY, Tenn. — The high waters are highlighting a big problem for some Madison County residents. 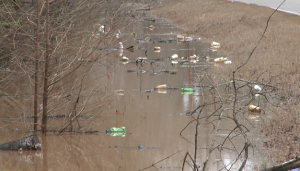 Those who live off of Westover Road are still seeing high waters from Thursday’s floods, but these high waters are raising a different issue.

“When it rains really hard, all the garbage just tends to float up that’s fallen off the trucks going to the landfill,” Wil Cummings said. Cummings said he has lived in the area his whole life.

Residents who spoke with WBBJ say that when this water is gone, the trash isn’t going anywhere and that if they want it cleaned up they have to do it themselves.

“If it’s in our ditch, we have to clean it up. We don’t want to have to look at that, you know? The people next to us do the same thing,” resident Brooke Thweatt said.

Residents say the errant trash has been a problem for years and that they’ve contacted officials but nothing has ever been done.

“Oh, it just sits on the ground. It’s just there, just sitting there until the next rain, and I guess some of it washes away but not all of it is going anywhere,” Thweatt said.

“You can see all the white spots, and that’s probably only half of what’s actually there, you know? A lot of it you can’t see. It’s covered up, but that just floats up,” Cummings said.

“It’s an eyesore. Nobody wants to come home looking like garbage, you know? They want to see something nice on the way home,” Thweatt said.

WBBJ reached out to the County Mayor’s office, County Commissioner Larry Sipes and Waste Management for comment and have not received replies.

We did talk with Commissioner Savannah Williamson who said he is aware of the situation but believes the County Roads Department should address the issue.