JACKSON, Tenn. — A worker has a scare Friday morning in downtown Jackson. 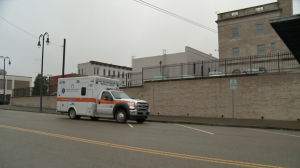 The man was working behind the Jones Federal Building when he slipped from a ladder. We’re told he worked for a private contractor’s mechanical systems company.

There is not yet word on what caused him to fall, but the fire department was called out to help get him down.

First responders say he likely broke his leg but should fully recover.