Jackson Fire Dept. works to save residents from house fires 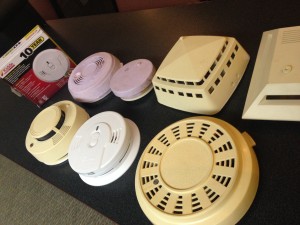 “Smoke detectors save lives. Like I’ve said before, they are an early warning system,” Childress said. “They’ll detect a fire early on. That way citizens know they need to get out of the house — there’s a problem inside.”

Jackson firefighters will go door to door Wednesday along Daughtery and Iselin streets in east Jackson to educate residents about fire prevention.

Jean Parson wasn’t sure her detectors were working, but after seeing an ad she called the fire department.

“He checked that one there in the hall, and it works,” Parsons said. “And he put one in my bedroom. And then they said ‘let me see your widow just in case something happens.'”

In 2015, nearly 80 percent of fatal house fires in the state of Tennessee happened in homes without a smoke alarm, a statistic the Jackson Fire Department is working to fix.

The detectors are provided by the State Fire Marshal’s Office.

Operation Stay Alive will continue Saturday in Bemis and south Jackson. They’ll canvass other areas of the city once every month.

The fire marshal says if you need a smoke detector, don’t hesitate to call the Jackson Fire Department at 731-425-8350.