JACKSON, Tenn. — An accused gunman is facing a first-degree murder charge in the shooting death of a man in December outside a midtown Jackson apartment complex. 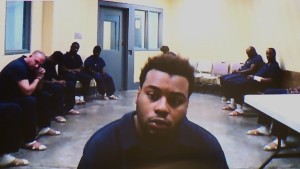 Trimon Pruitt appeared Thursday in Jackson City Court on a first-degree murder charge in the death of Tony Willoughby.

Officers responded to the report of the shooting around 9:45 p.m. in the area of 116 Allenton Heights. There they found Willoughby lying on the side of the street along with several spent .40 caliber casings. EMS personnel determined Willoughby was dead.

Investigators spoke with a man who told then he had driven WIlloughby to the apartment complex to meet someone. The man told them it was during the meeting that a man approached Willoughby and started shooting.

Police found and talked to a witness who identified Pruitt as the gunman, according to court papers. The witness told officers Pruitt shot Willoughby multiple times and then chased him across the street and shot him again as he lay on the ground.

“It’s wonderful that the police did make an arrest, and I’m glad for the family most of all that they may have some closure,” Ed Thomas Hill Jr., who works nearby, said.