A man charged with kidnapping his girlfriend and carving words into her stomach appeared in court. 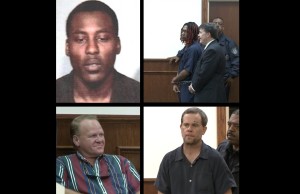 Joseph Patterson is accused of holding his girlfriend against her will last week in their hotel room.

She testified saying she had been brutally beaten, tied up, gagged, shoved underwater twice, and her body mutilated. She said because of her broken knee she was unable to run and had no access to a phone until the next day.

“He asked me, ‘Don’t lock me out,’ but I did. I locked him out and if I hadn’t had the cell phones there I would have been just locked in the room,” she said.

City Court Judge Blake Anderson doubled Patterson’s bond from $100,000 to $200,000. He said Patterson was a threat to society and passed the case on to the grand jury.

In another case, Jeffrey Mason, who is charged in the murder of Kheirra Murphy earlier this year, has been sent for a second mental evaluation.

Darwin Reid’s hearing was reset to March 31. He is charged with aggravated child neglect in the death of his girlfriend’s four-year-old son, Zion Croom.

Timothy Lowrance is charged with extortion after allegedly impersonating a U.S. Marshal. His case was passed on to the grand jury.