MEDINA, Tenn.– A woman could be seen sitting in a car dangling from a power pole for nearly two hours early Saturday morning. 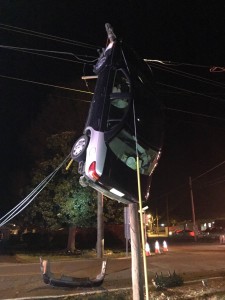 Police said they were first dispatched to the scene around 11:30 p.m. Investigators said it’s unclear at this time how the older model saturn sedan ended up tangled with the pole.

The car, with the driver still inside appeared to be hanging onto a guide line by a front tire.

Medina fire chief Jeff Rollins said as the woman was trapped inside they were able to communicate with her.

Firefighters used a bucket truck from Gibson Electric Membership Corporation to get her out of the car safely, after smashing the passenger front window.

It’s unclear right now if speed or alcohol played a part in the incident. The woman was transported to a local hospital to be checked for injuries.

Eyewitnesses said once the car was removed from the pole several bottles appearing to be alcohol fell out.

Stay with WBBJ 7 Eyewitness News for more updates as they become available.