Police report explains how car got stuck on utility pole

GIBSON COUNTY, Tenn. — An unofficial traffic crash report from the Medina Police Department lays out the explanation of how a car became stuck on a utility pole, hanging eight feet in the air late Friday night with the driver still inside. 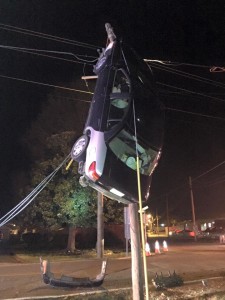 A photo on the WBBJ Facebook page of the car dangling from the utility pole with the driver still inside went viral, with thousands of people simply asking “How?”

The driver was in the car about two hours before being rescued. She was taken to the hospital with minor injuries and released the next day. She has not been cited in the crash.

The report states that the driver exceeded the posted speed limit of 30 mph.

The wreck occurred around 11 p.m. when a 2002 Saturn was traveling eastbound on West Church Street when it left the right side of the roadway and struck an antique iron fence, according to the report.

The car continued along the fence with intermittent contact for 48 feet before straddling a 45-degree guide wire attached to a utility pole.

The vehicle then traveled upward along 21 feet of the guide wire before hitting the utility pole three feet from the top of the pole, according to the report.

Police say the car then rotated around the pole and the right front wheel caught on the horizontal guide wire, suspending the vehicle against the pole. The car’s rear bumper was about eight feet above the ground.

The car was equipped with an alcohol ignition interlock device, and the driver had complied with the device, according to the report. The driver is also listed as wearing a seat belt.