DYERSBURG, Tenn. — Two men are facing charges after police say one of them lied about an accidental shooting. 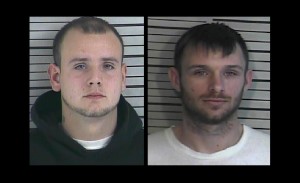 Officers responded April 4 to a local hospital where Steven Cogdell, 29, was being treated for a gunshot wound to the leg.

Cogdell told police he was walking earlier that day in the Bruce Community of east Dyersburg. He told police he heard gunshots and then realized he’d been hit.

He also told them an older man had given him a ride to the emergency room for treatment.

Investigators later found that Cogdell had accidentally shot himself in the leg while riding in a car driven by Christopher Lee, 24, according to a release from the department.

They also say the incident did not occur in the Bruce community as Cogdell had first reported.

Investigators located the car and found two bullet holes in the interior. They also recovered the gun.

Cogdell is charged with possession of a weapon with the intent to go armed. He is set to appear at 4 p.m. April 26 in Dyersburg City Court.

Lee is charged with being a felon in possession of a firearm.

Organization works to advocate for victims of mass casualty crimes