According to officials, the body of a young woman was found in a ditch on April 24, 1981 in Miami County, Ohio. It was determined that she had been deceased less than two days before she was found. 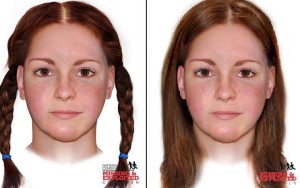 A press release states she appears to be Caucasian and is estimated to be in her late teens to early twenties and was approximately 5-foot-6 and 125 pounds. She had long reddish-brown hair that was styled in two side braids with a part down the middle, according to the release.

Miami County Sheriff’s Office Chief Deputy, Dave Duchak, provided several more descriptions of “Jane Doe” in a press release in hopes someone can identify her. Duchak says she had a ruddy complexion with freckles on her face. She also had several scars including one beneath her chin, one on her left arm, two on her left wrist, right hand, right ankle and right foot. She had also been treated by a dentist in life as her top right central incisor had a porcelain-metal crown.

“Jane Doe” was found wearing bell-bottom blue jeans, a brown turtleneck sweater decorated with an orange crisscross on the front and a hand-made tan buckskin pull-over jacket with leather fringe around the seams with a deep purple lining.

The report states that in February of 2016 forensic scientists working with Miami County Sheriff’s detectives conducted a facial reconstruction using new technology. Additional lab testing on her clothing has found pollen that lead investigators to believe that “Jane Doe” may have been from or spent a significant amount of time in the northeastern dry-oak forest region, which includes areas in Pennsylvania, New Jersey, New York, Connecticut, Massachusetts, and Rhode Island. The National Center for Missing and Exploited Children states that new testing was just completed on the pollen that was found on the clothing “Jane Doe” was wearing and it indicates that she may have been from Tennessee.

If anyone recognizes or has any information in regards to “Jane Doe’s” identity, please contact Detective Steve Hickey with the Miami County Sheriff’s Office, 937-440-3965 ext. 6629 or the Miami County Communication Center at 937-440-9911.