MADISON COUNTY, Tenn. — A local Friends of the NRA chapter recently presented a check for $2,800 to the Madison County Sheriff’s Office for a new costume for gun safety mascot Eddie Eagle. 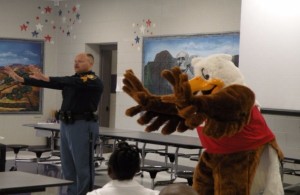 The Forked Deer Chapter of the Friends of the National Rifle Association presented the check last week to Sheriff John Mehr and Sgt. Allen Castleman, according to a release from the sheriff’s office.

Eddie Eagle and his friends — or “Wing Team” — remind children that if they see a gun to “Stop! Don’t touch. Run Away. Tell a grownup,” according to the release.

The new school year will mark seven years that Sgt. Castleman and the sheriff’s office has presented the Eddie Eagle program to students from kindergarten to fourth grade, according to the release. 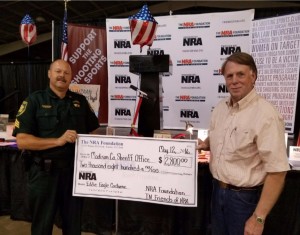