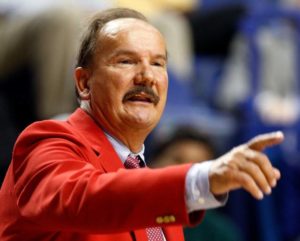 (AP) – Longtime Scott County boys’ basketball coach Billy Hicks, who grew up in Harlan County and played basketball at Evarts, is being inducted into the Kentucky High School Basketball Hall of Fame this weekend.

“Excited, more than anything, humbled,” Hicks told the Lexington Herald-Leader on Wednesday. “You look at the people that are in the Hall of Fame and those who will be going in, it’s impressive. I can’t help but think ‘What am I doing here?'”

Hicks went to Scott County in 1994-95 and has turned the program into one of Kentucky’s high school elites. He’s coached in five Sweet Sixteen championship games, with Scott County winning two state titles. With a record of 910-264, Hicks has won more boys’ basketball games than anyone who has coached in Kentucky.

Hicks, 63, coached for 14 years in eastern Kentucky – in Evarts, Harlan and Corbin.

He grew up in Harlan County and began dreaming of being a coach when he was 12. He was one of 11 children in a coal-mining family, and coaching seemed the most realistic way out of a life of working in the mines.

He played basketball at Evarts High School and attracted college scouts. He spent a year at a South Carolina junior college before transferring to Wofford.

After college, Hicks returned to Harlan County to teach and coach but also dabbled in the mines. He found he made more money as a part-time miner than from education and decided to leave teaching and coaching and go to the mines full time.

“My mom, she never raised her voice at me in her life,” Hicks says of Maggie Hicks (who passed away this month at 97). “But this was the one time in my life when she raised her voice. She flat told me I was not going to quit teaching and coaching. She said, ‘I know (coal mining) is booming now, but it won’t last. It never does.'”

The induction is Saturday in Elizabethtown.