SAVANNAH, Tenn — A man died on the job Monday after an on-the-job accident.

It happened in Hardin County early this Monday at a local rock quarry. 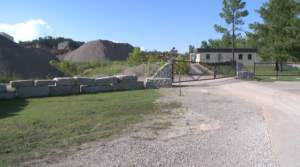 First responders said around 8:30 a.m., they received a call about a rock falling on a piece of equipment while it was operating at the Vulcan Materials Company quarry.

Authorities said the man operating the equipment was hit by the boulder and was pronounced dead at the scene.

“The boulder did fall from approximately 8 to 10 stories onto a worker below that was operating a track hoe,” Hardin County Fire Department’s Assistant Chief, Richard Guardino said. “Medical personnel that were on the scene deemed that he had succumbed to his injuries.”

“Protecting the health and safety of our employees guides everything we do. Today is a sad day for the entire Vulcan family. One of our employees was fatally injured this morning at our quarry in Savannah, Tennessee. No one else was involved. Our thoughts and prayers are with our employee’s family and friends. Vulcan is conducting an investigation into this matter. Additionally, we have contacted the Mine Safety and Health Administration (MSHA), which is conducting an investigation.”

The man’s name nor any details about him have been released.