GIBSON COUNTY, Tenn. — Officers in Trenton are investigating an incident police are now calling a murder-suicide. 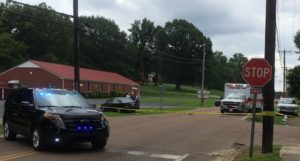 Police say a man shot his wife Tuesday morning near the intersection of South College Street and West 10th Street before turning the gun on himself.

Police have identified the man as Cedric Pigue, 53, of Trenton. The victim was his wife, 50-year-old Angela Pigue.

When police arrived, Pigue shot himself before he had any interaction with officers, according to Trenton Police Chief Will Sanders.

A witness told WBBJ 7 Eyewitness News that a man had been shot at the scene of a car wreck.

“I thought he’d just had a wreck over here,” Brenda Hampton, who saw the entire ordeal while sitting outside reading told WBBJ. “I saw stuff in the road, but then when he went to the car – I heard two shots and then I heard the other one and he just hit the ground. I was just in shock after that.”

Records from the Trenton Police show they responded to the couple’s home three times since Friday, but could not speak to any further history of violence between the couple.

Police say both bodies are being taken to Memphis for autopsy.