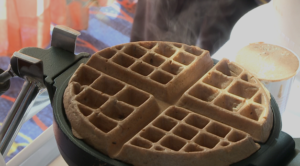 Duke said they wanted to celebrate National Waffle Day by recognizing the men and women who serve the city. “They’re always here for us and they never know when they walk out of their home if they’re going to get to go home or not,” she said.

Officers enjoyed sausage and bacon plus waffles with all the toppings.

“It was a really good breakfast they laid out for us,” Capt. Ron Adams with the Jackson Police Department said.

Adams said they are blessed to have community support. “The officers that work on the streets in Jackson and everywhere in this country really do have a hard time these days, and it’s just wonderful to see that they’re getting the kind of support that they do,” he said.

Duke thanks the officers for keeping the community, businesses and families safe. “We just want them to know that we really appreciate their service,” she said.

Duke invited officers to come in for waffles any time they want. She said the hotel plans to make the National Waffle Day breakfast an annual event.