Suspect in custody after gunshots at Black & Decker in north Jackson

JACKSON, Tenn. — Officers have a suspect in custody after shots rang out Thursday morning outside the Stanley Black & Decker plant in north Jackson. 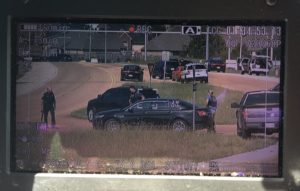 No one was injured, according to police. All the gunshots reportedly took place outside in a parking lot.

Police say a disgruntled employee fired shots into multiple vehicles just before 10 a.m. in a parking lot at the plant on Passmore Lane near the Highway 45 Bypass.

A WBBJ 7 Eyewitness News reporter on scene saw officers take a man into custody who appeared to be naked.

Passmore Lane is closed to traffic and will be for several hours while officers process the crime scene, according to police.

Stanley Black & Decker released the following statement in response to the shooting.

“This morning a temporary employee committed an act of workplace violence in the parking lot of our Jackson Facility. We are thankful that no one was hurt and grateful to the local law enforcement for their extremely rapid response and apprehension of the suspect.”

Authorities have not released the suspect’s name but say he is a white man.

He reportedly used a long gun to shoot the vehicles before fleeing through a field across the street.

A spokesperson for Stanley Black & Decker says the plant will close their second and third shifts Thursday and will reopen at 7 a.m. Friday.

The Jackson-Madison County School System tweeted just before 11 a.m. that nearby schools had been released from lockdown.

Stay with WBBJ 7 Eyewitness News for updates in this developing story.