Woman killed in murder-suicide was mother of 4

BOLIVAR, Tenn. — Thursday morning, 27-year-old Camille Thompson, a mother of four, was shot to death in Hardeman County. The gunman, identified as her husband, Johntate Thompson, led officers into Chester County before taking his own life. 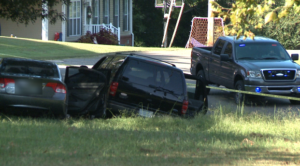 “It’s a sad day what we experienced on this morning,” family friend Bernice Lofties said.

The Bolivar Police Department responded to a call about a man driving erratically. Units pursued Thompson, which led them to Pleasant Creek Lane where the shooting occurred.

Authorities said Johntate Thompson shot at Camille two separate times and tried to run over. After Thompson shot and killed Camille he left the scene, which led to a police chase.

Family and friends also said two children were in the grandmother’s car at the scene and the other two were in Camille’s car while the suspect shot at the vehicle.

Camille’s friends said she was starting to grow spiritually in church.

“Camille, her life was turning around,” Lofties said. “Sunday, she came to church and she rededicated her life to Christ.”

Chief Baker said Camille’s mother arrived on scene as the incident was taking place. Camille’s cousin and friends of the family said they were spending time with her a couple days before this incident.

“To know just a little bit about what she was going through and then to see it end up this way is very sad,” Bernice Lofties said.