JACKSON, Tenn. — Jackson police arrested a teenager after reportedly finding his puppy with a USB cable wrapped around its neck. 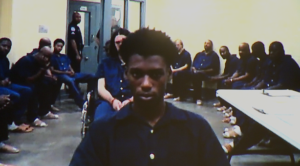 Marcus Sturghill, 17, appeared Monday in Jackson City Court on an animal cruelty charge. Police said they found his 2-month-old puppy tied to a ladder Thursday with a USB cable in the backyard of a home on Sunnyside Drive.

“I think it’s terrible because the puppy has no way of defending himself,” Everett Fairley, a neighbor, said.

Officers said the loop around the puppy’s neck was tight and cut into its skin. Police said the animal could only move about six inches because of the wire.

“The puppy was extremely malnourished and no water or food source within its reach,” Jackson City Court Judge Blake Anderson read in court Monday.

Police said the puppy was treated by a veterinarian and then released to a foster home.

Police said they had to use a knife to remove the USB cable from the puppy’s neck. Fairley said he could never imagine hurting his pet. “If you’ve got a puppy, take care of them because they’ll take care of you too,” Fairley said.

Sturghill is being held in lieu of a $5,000 bond. He is scheduled to return to court Thursday.

Deer confirmed to have CWD in Weakley County