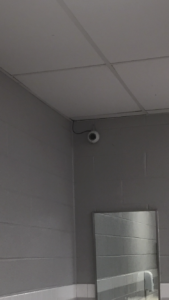 DECATURVILLE, Tenn — The leader of the Decatur County School System is now apologizing.

“I made a bad decision.  We needed to take it down and that’s what we did,” Director of Schools Branson Townsend said.

This comes Thursday after students at Riverside High School in Decaturville noticed a new addition in what is expected to be a private place.

“I authorized the staff to place a camera,” Townsend said.

The camera was installed in a boys’ bathroom after several incidents of vandalism.

Although the director said the camera wasn’t recording students and staff, they didn’t know that.

When some students noticed the camera they told staff members and they immediately took action.

The cameras were taken down after several parents called the school complaining to the principal, who was unaware of the camera because he was never notified by Townsend of the change.

Some in the community call the decision disappointing.

“I do understand their concerns and I do apologize for making that decision,” Townsend said.

“I believe it is an invasion of privacy to our kids,” said Teresa Weatherford who thinks it was a bad decision.  “I realize their intent was probably for the safety of our kids and that does concern me.”

Townsend said his next approach to stop vandalism will be different.  He said he will try talking to the staff to come up with a better solution.

The Decatur County Sheriffs Department has a report about the camera on file.