JACKSON, Tenn. — Students at Thelma Barker Elementary School made a wager with their principal — and let’s just say he lost that bet.

In a quest to raise $2,500 for Relay for Life, Principal Ryan Kirkbride said he would shave his head if the student reached their goal.

He held up his end of the bargain Friday, letting a teacher who is fighting cancer do the honors. She says this year’s fundraiser was personal. 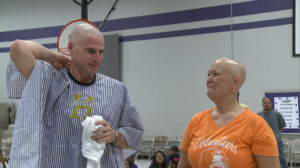 “When I was shaving his head, it took me back to the afternoon that my son shaved my head,” Teacher Marsha Sanderson said. “I’m fighting cancer right now and doing very well and thankful for that, and the support system here at Barker has a lot to do with that.”