BROWNSVILLE, Tenn. — Veterans Day is a day those all across America remember those who have served our country to protect our freedom. Friday, one local soldier was honored for fighting in one of the most divisive conflicts in our history, the Civil War. 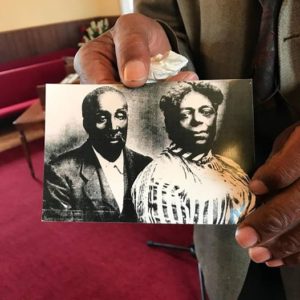 It was a calm morning outside of Brownsville with family and church members gathering to pay respects to one of their founders.

“The old man, as I understand, was sold as a toddler with his mother from Virginia to Brownsville, Tennessee, here and sold to a slave owner here named Mann,” great-grandson Thomas Tucker said.

Alexander Mann Tucker lived and worked in Brownsville as a slave until he was around 17 years old.

“He ran off and joined the Union Army, and he fought down in New Orleans,” Tucker said.

Tucker served as a private in the 4th U.S. Colored Cavalry in New Orleans during the Civil War.

“His story was that he saw the slave owner’s son down there fighting on the Confederate side, but when they came back, because they had grown up in the same household, they still remained friends,” his great-grandson said.

After the war, he came back and settled on a farm in Haywood County until he passed away at age 70.

Friday morning, community leaders joined the great-grandchildren of Tucker in a service honoring his legacy, ending with the presentation of colors.

“The price of freedom is not free,” Mayor William Rawls said. “The sacrifice from our veterans and the family of veterans — we support our veterans, from 1886 to 2016. We still have to honor our veterans.”

The family was also presented with a declaration from Rep. Johnny Shaw thanking them for their great-grandfather’s service.