JACKSON, Tenn. — A woman who was stabbed Thursday in an incident at a Jackson mental health clinic is awake and alert, according to her sister. 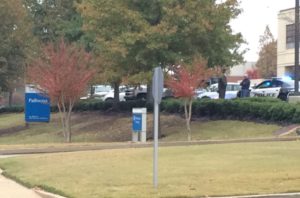 The woman, who is pregnant, was stabbed more than 100 times, according to her sister, who provided the information to WBBJ 7 Eyewitness News by phone and asked not to be identified.

The woman’s unborn baby appears to be fine, according to the sister.

The victim was taken by ambulance to a Memphis hospital. She had to have her eye repaired and may have some nerve damage in her arm. They don’t yet know if her vision will be affected.

According to Jackson police, the woman, a Pathways Behavioral Health Services employee, was stabbed multiple times by 45-year-old Don Fitzgerald White, who was being treated at the facility.

Police responded to the stabbing in progress, and White was shot by one of the responding officers and later died at Jackson-Madison County General Hospital.

The Tennessee Bureau of Investigation was called in to take the lead in the investigation of the officer-involved shooting.

West Tennessee Healthcare officials say they are not able to release specifics about the employee or patient’s mental state because of HIPAA regulations. In a statement, they say they appreciate all of the community’s support during this difficult time and are keeping all involved in their thoughts and prayers.

We were told that since TBI offices were closed Friday, any update on White’s background check wouldn’t be available until Monday morning.