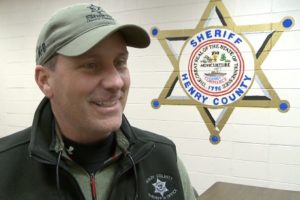 The video looks like something out of the wild west, until you realize this cowboy is riding the sheriff’s squad car. See the full video here.

“The sheriff’s office received a call of a calf being loose on Highway 79 North,” Henry County Sheriff Monte Belew said.

The sheriff said the calf fell out of a trailer and would not get off the highway.

So what’s the sheriff supposed to do? Traffic was backing up and the calf was still loose on the highway. So he called over his cowboy friend and tells him to mount his trusty steed — the front of his squad car.

“He said, ‘Get on the hood of my car!'” the cowboy, David Bevill, said. “And I said, ‘Alright! We’ll give it a shot.’ And so it all worked out. Think it was the best loop I’ve ever thrown in my life.”

Even though Bevill said he was nervous, you can’t tell when he ropes the calf with ease — until the calf fights back.

“That calf is dragging me and I’m trying to get to where I can tie it to the front of the car, and I look back at Monte and he is just laughing,” Bevill said.

“I’ve never had anything happen like this before, and it was all just over a lifelong friend of mine helping me out, getting the calf out of the middle of the road on Highway 79 North,” the sheriff said.

The calf made it back home safe and sound.

Sheriff Belew said he has been contacted by media from across the country, from Montana to Tampa. ABC New York has also shared the video.