JACKSON, Tenn. — Tucked away in downtown Jackson is one of the city’s highest-rated restaurants, according to travel websites. 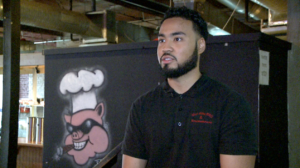 It’s not just the food, but the staff behind the tasty barbecue that makes this place special.

“I’m in Memphis all the time, and West Alley’s got Memphis beat,” customer Jimmy Hawks said.

It’s a fan favorite, according to locals and visitors.

“Food was good, it was quick,”Scott Hobson, a customer from Iowa, said. “People are friendly and the service was great. We’ve been back multiple times.”

West Alley has a 4-and-a-half star ranking and is one of the top 10 Jackson restaurants on TripAdvisor and Yelp — high ratings that have a lot to do with the owner Christian Brantley.

“There’s many, many restaurants with great food,” Brantley said. “What gets people to come back consistently is making sure that you can be able to offer the excellent customer service every single time you walk through the door.”

Brantley is a Jackson native and graduated from Liberty Tech High School before attending Middle Tennessee State University. After graduation, he returned home to Jackson, taking over the reigns at West Alley, which just celebrated three years in business.

“When he said that he wanted to come back, that made me happy because most of the young people, they don’t want a small town,” Christian’s grandmother Katie Brantley said.

“And to know right across the street from my campus there’s a guy who already has his own business is really, really motivating,” Gaye said. “And it’s part of the reason I keep coming here.”

“I’m proud of the people who are staying here and making the place happen, but basically I’m here because it’s got really good barbecue,” Hawks said.

Brantley, 26, says he couldn’t imagine having his blues and barbecue restaurant in any other city.

“I am very, very proud to be an African American business owner,” Brantley said. “That lets you know that in Jackson that all minorities are able to push forward. That’s why I choose the city of Jackson. It’s not only home, but they’re also looking for progression.”

Brantley says he can’t take all the credit for West Alley’s success. He says it’s his staff, from the cooks to the servers, who always put the customers first, attracting visitors from all over.

“I haven’t traveled a lot in my life, but I meet people from all around the world,” waitress Katrena Howard said. “Downtown Jackson brings interesting people.”

Brantley says West Alley is one of many businesses attracting people to downtown, a trend he hopes continues.