HARDEMAN COUNTY, Tenn. — Katherine Ware worked as an administrative assistant for the Hardeman County Sheriff’s Department from 2004 until she was terminated in July 2016. The mayor says she was terminated over a salary dispute and poor job performance. 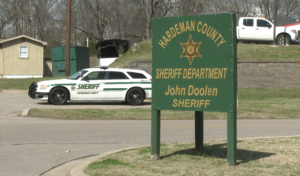 “I did recommend her termination six months prior to the sheriff terminating her for insubordination and violating county policies and also falsifying documents,” County Mayor Jimmy Sain said.

But according to a civil suit filed by Ware, her termination was a result of denying sexual advances by her superior, Chief Deputy Billy Davis. She filed a complaint last Friday, highlighting a number of detailed occasions when she alleges she was sexually harassed while at work.

“We have a fine staff at the sheriff’s department,” Slain said. “Chief Deputy Davis is, I think, a fine officer. I’ve known him for a long time, very trustworthy, and I back him 150 percent.”

In the lawsuit, Ware is asking for back pay and compensation for pain and suffering as well as the reinstatement of her job at the sheriff’s department.

“The sheriff called in the TBI for investigation on the allegations in the lawsuit,” Mayor Sain said.

We also spoke with Hardeman County Sheriff John Doolen who says he is unable to comment on the allegations at this time due to any pending investigation.