JACKSON, Tenn. — Rainy days are contributing to putting the city of Jackson in a tight spot. City council members said it’s drying out their yearly budget. 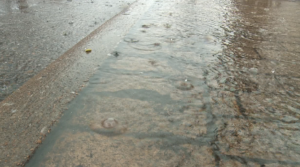 “It’s affecting the infrastructure of the city, the streets, the culverts, the ditches,” council member Randy Wallace said. “The ditches are starting to overflow, erode. Culverts are collapsing, those types of things.”

Wallace said it was the One Jackson committee who brought this problem to the city’s attention.

“The committee was appointed to look at the fact that the city no longer has a balanced budget,” Wallace said. “We’re spending more money than we’re taking in, and the committee is looking at a variety of different ways to alleviate that problem.”

To fix the problem, residents could be asked to see an additional fee on their utility bill, but that’s something some council members wouldn’t be OK with.

“I think we can find the money somewhere else,” council member David Cisco said. “I don’t think we need to add any more taxes.”

The council did approve the One Jackson committee to look at options for bringing in that revenue. If there were a fee, it could vary between homes and businesses.

“Coming up with a way to implement the fee if we decide to do that is going to be very difficult,” Wallace said. “We’re looking at maybe hiring an outside consultant to look at the overall structure of the city and help us make the determination of doing that.”

The One Jackson committee meets once a month. There is not yet word on when the committee would present a proposal to the city council.