BENTON COUNTY, Tenn. — There is nothing left of a home that once stood on Rosebud Ridge in Sugar Tree. 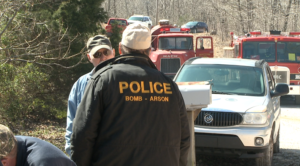 “The sheriff’s office received a call this morning about 2:15 that there was a house fire, and we responded with the fire departments,” said Chief Deputy Jason Lowery of the Benton County Sheriff’s Office. “The house was totally engulfed.”

South 40 and Holladay/Mcillwain Fire Departments were first on the scene followed by the sheriff’s office.

“We found out that the homeowner was missing, and today, after everything cooled down, the fire departments located a body inside the residence,” Chief Deputy Lowery said.

“From our understanding, there was a lot of items inside the house, a lot of paper products, boxes, and that caused the house to go up pretty quickly,” Lowery said.

Officials tell us the accumulation of things inside the home not only helped to ignite the fire, but neighbors say these things would have also made it extremely difficult for the resident to escape.

Officials say the resident was an older gentleman who lived alone.

“The body is being sent to the state medical examiner’s office in Nashville where an autopsy will be performed,” Chief Deputy Lowery said. “And hopefully the body will be positively identified at that time.”

The cause of the fire is still under investigation. The name of the victim is not being released at this time pending notification of family.