TBI on scene of officer-involved shooting in Alamo

CROCKETT COUNTY, Tenn. — The Tennessee Bureau of Investigation is at the scene of a Thursday afternoon officer-involved shooting in Alamo. 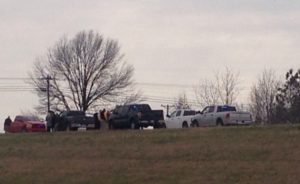 Sheriff Troy Klyce has confirmed that someone was injured in the shooting. He said no deputies were injured.

The shooting took place near the intersection of Highway 412 and Highway 88, according to the TBI.

Neighbors say the driver of a white SUV was driving erratically and even on the wrong side of the road on Highway 412. The details of how the vehicle went off the road or what led to a deputy firing their weapon are not clear at this time.

Neighbors say they saw one person airlifted from the scene.