City says building is keeping them from taking over humane society

JACKSON, Tenn. — The Jackson-Madison County Humane Society prepares for one of its biggest fundraisers of the year Saturday, the “Fur Ball.” This annual fundraiser comes as the City of Jackson’s plans to build the Jackson Animal Care Center are still in the works, according to officials. 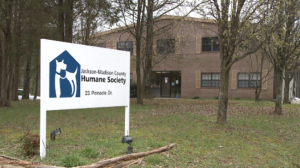 It has been 10 months since the Jackson City Council approved funding to take on the humane society operations, expecting a new building by the end of the year.

The city said it has not taken on the operations yet, because the funding to build still is not there.

“We do have some funding budgeted for operation of a animal care center and adoption center. We’ve got to get a quarantine center built. That’s going to be the first step before we move forward,” Mayor Jerry Gist said.

Gist said they are depending on private individuals to raise the money for current facility renovation and a new quarantine building.

“The funding that’s in this years budget is there for the operation of the center. It had nothing to do with capital for building a new building. So we still have to raise enough money to do that,” Gist said.

The mayor said they do expect to include an operational budget for 2017-18. However, it is not known when the building process would begin.

The humane society keeps about 100 animals at its no-kill shelter on a regular basis.