HUNTINGDON, Tenn. — The morning hustle and bustle can be stressful, but one first responder is working to make Huntingdon Middle School student’s morning routines a little brighter.

Walter Smothers said he started coming to the school each morning as a safety precaution following the 2012 Sandy Hook shooting in Connecticut. 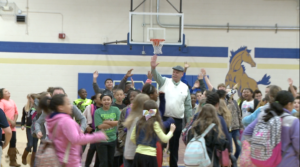 “The director of schools asked to come up each morning to the gymnasium where students assemble to provide security,” Smothers said.

But faculty members said it quickly became much more than just a security precaution.

Fuller said teaching students to build bonds with emergency responders like Smothers, is something that can not be taught in a classroom and the visits are something unique to the school.

“They get to know him in a positive light first, and I love that part.”

Smothers said as an emergency responder, it is important to show students he is there to serve the community.

He said he has one goal in mind when visiting the school.

“I want them to know I am here to protect them,” Smothers said. “Our department is and not just protect them, but to have fun also.”

Smothers said he also works with the school to host various safety workshops throughout the year where students and parents are welcome to attend.