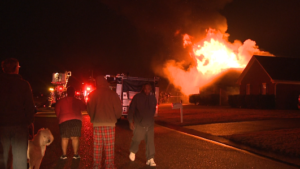 Heavy flames swept over a home on Birdsong Cove. Fire officials confirmed a car inside the garage caught fire, and quickly spread to the rest of the house.

A mother, father, and son were inside when the fire ignited. Thanks to Deterrius Stewart’s quick reaction everyone made it out safely.

“I woke up from the popping noise.” Stewart said. “I looked in the garage, it was a lot of smoke and then I had went to wake my mom and them up.”

Firefighters battled the blaze for nearly two hours. Some neighbors said as soon as they realized the home was on fire they took immediate action to make sure everyone was okay. Nearby neighbor Areatha Coleman said she was getting ready for work when she heard loud noises coming from outside.

“Me and another neighbor started knocking on neighbors’ doors to make sure everybody you know go out and was safe.” Coleman said.

Investigators said there was a working smoke alarm inside, and encourage community members to continue checking their own.

“Make sure you have a working smoke alarm. Just like these homeowners got out, you can get out too.” Battalion Chief Bowers said.

Stewart said he and his parents plan on staying with a family member until they figure out what’s next. “Everything’s alright, we just have to be strong and work harder.” Stewart said.

Investigators say a cause has not yet been determined.