MADISON COUNTY, Tenn. — Commissioners appoint a new member to serve in a vacant county seat, and officials decide to move forward with a decision involving schools.

A new leader is sworn in to the Madison County Commission Monday morning. Cyndi Bryant will now serve in District 4. 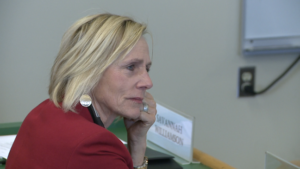 “If you want change, you have to be involved, and I think when this opportunity came up, I saw an opportunity for me to get more involved in the county,” Bryant said.

Bryant took the place of Bill Walls, who had to resign from the position because of a new home address outside the district. Bryant said she’s excited to take on this new role with fellow commissioners.

Also at the meeting, commissioners addressed concerns over the Jackson-Madison County School System’s needs. An air conditioning unit at North Side High School is just one of many needs listed in order of importance.

Monday, commissioners voted to give them a portion, $1.7 of the $3.4 originally planned.

“We’re trying to do it in a timely manner, and we feel like 1.7 was a good number, and then if the schools could move forward on their side,” Commissioner Doug Stephenson said.

Stephenson said that doesn’t mean the rest of the funds won’t be given later.

County commissioners also voted on a consideration of borrowing $10 million for future needs such as the jail and school facilities. Rates will be considered before the commission decides whether or not to go through with the borrowing process.