2 juveniles killed in crash near Lexington

HENDERSON COUNTY, Tenn. — Two juveniles have been killed after a Tuesday crash near Lexington. 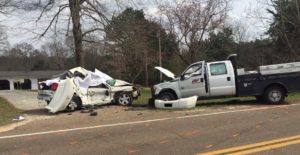 A 17-year-old female driver and her 17-year-old male passenger were killed, according to the Tennessee Highway Patrol.

The crash happened just before noon on Highway 22A south of Lexington and involved a Tennessee Department of Transportation truck and a 2008 Dodge Avenger.

According to a THP report, a female juvenile was driving the Avenger southbound on Highway 22A and the TDOT truck was traveling northbound.

The Avenger reportedly lost control while negotiating a curve and crossed into the oncoming lane.

TDOT officials confirm one of their vehicles was involved in the crash and the three people inside were transported, including the person who was airlifted.