UPDATE: Lockdown lifted at UT Martin after report of gunshots in area

UPDATE — A campus lockdown has been lifted at the University of Tennessee at Martin after a report of gunshots in the area.

The all-clear was announced via text alert at 1:37 p.m.

The shooting that led to the lockdown reportedly resulted from a family altercation, according to school officials. No injuries have been reported.

A UT Martin student is in custody. Two other people who are not students are being sought.

“A family altercation ended in a shooting on Hannings Lane near the university campus. An unidentified UT Martin student is in custody. Two African American males who are not UT Martin students are at large and are reported to be traveling to Lauderdale or Madison County in a 2-door black Mazda. Any information about these suspects should be reported to law enforcement officials. No injuries are reported.”

Grimes said there are extra police patrols around campus and in parking lots for added security.

MARTIN, Tenn. — The University of Tennessee at Martin campus is on lockdown after a report of gunshots in the area. 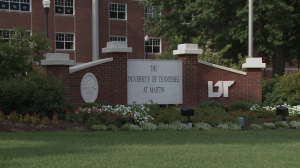 The lockdown will remain in place until further notice, according to Chief Communications Officer Bud Grimes with the Office of University Relations.

The gunshots were reported on Mt. Pelia Road near the Boling University Center, according to a text alert.

The alert went out around 1 p.m. from the university’s Office of Public Safety to anyone opted in for the school’s alert system.