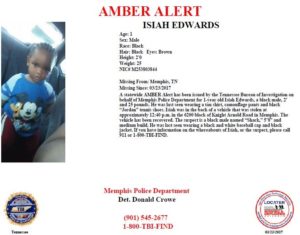 UPDATE — The Amber Alert for Isiah Edwards is canceled. He has been recovered by Memphis Police, according to the Tennessee Bureau of Investigation.

MEMPHIS, Tenn. — The Tennessee Bureau of Investigation has issued an Amber Alert for a 1-year-old boy.

Isiah Edwards was in the back of a vehicle that was stolen around 12:40 p.m. Thursday in the 6200 block of Knight Arnold Road in Memphis. The vehicle has been recovered.

The boy is described as a black male around two feet tall and weighing around 25 pounds.

The suspect is described as a black male named “Shack” who is around five feet eight inches tall with a medium build. He was last seen wearing a black and white baseball cap and black jacket.

Anyone with information on Isiah or the suspect is urged to call 911 or 1-800-TBI-FIND.