JACKSON, Tenn. — Neighbors sprang into action Friday as a fire broke out in a home on Camellia Drive in south Jackson. 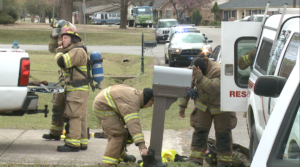 The call went out just before 11 a.m.

Jackson Fire Marshal Lamar Childress says it may have been an electrical fire. Officials later discovered there was no one at home at the time.

A neighbor we spoke with didn’t take any chances, kicking down the door to see if anyone was inside.

“Drop down to the floor, holler inside the house was anybody in here. By then smoke just started rolling out pretty hard, so I stepped back. Few seconds later, police officer coming down the street, so I flagged him on down,” neighbor Fred Kinney said.

Members of the Red Cross will help the family.