JACKSON, Tenn. — Fresh off a busy week at the state capital, State Representative Jimmy Eldridge, republican, of Jackson, said some of the most talked about bills over the past week involve guns. 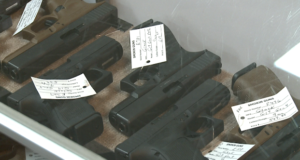 “You know, there are some bad apples out there carrying guns,” he said. “You cant stop everybody at every door in America.”

One bill approved by the Judiciary Committee would allow off-duty police officers and sheriff’s deputies to carry firearms into sports venue, a place currently off limits to all types of weapons.

Another would allow the use of silencers, and a third would legalize guns on boats.

Eldridge said though he has not served on a committee where those bills were discussed, he would support their passage.

“You know they’re for safety,” he said. “For example, if you were out in a boat and run into a problem, at least you have some protection.”

But not everyone agrees with the proposed laws.

“I think they really should stop having guns everywhere, and letting everyone walk around with them is unsafe,” said Lilly Goudy, a Jackson resident.

“I know people need to protect themselves too, but that’s what we have the police here for,” said Herman Fingers, who lives in Jackson.

Eldridge said he and his colleagues are tackling a lot of other issues in the legislature and have plans to use their more than $37 billion budget to improve the lives of all Tennesseans.

“Tennessee is rated as one of the fiscally responsible states in America, and that’s something for Tennesseans to be proud of,” he said.

Eldridge believes the most important issue before lawmakers this session deal with education, and also says some of the other highly discussed bills include the broadband and the gas tax bills.