Teen in custody after Humboldt shooting

HUMBOLDT, Tenn. — Police responded to a shooting Friday afternoon at a Humboldt home. 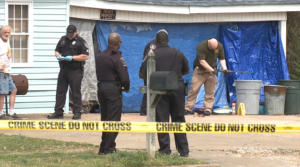 The incident took place around 1 p.m. Friday in the 2700 block of Ferrell Street.

A neighbor describes how the scene unfolded.

“Next thing I know, I hear a couple pops, look, and one of them happened to have gotten shot,” neighbor Dustin Thacker said. “The one that did the shooting said, ‘I told you not to come at me. You should have stopped.'”

Police say the alleged gunman was there when they arrived.

“The suspect was still present, and the person he had shot was lying in the driveway,” Assistant Police Chief Reynard Buchanan said.

Officials say the suspect, an 18-year-old male, was taken into custody. The investigation continues as to what may have led to the shooting.

“It’s starting to get a little too close to home, and I’d rather not have any trouble coming from across the street,” Thacker said.

Police say the victim was shot multiple times but was still responsive when medics arrived. He was taken to a local hospital.

The garage of the house is where witnesses say the victim was shot by a resident of the home. Neighbors tell us this isn’t the first time something like this has happened.

“‘Cause a couple of weeks ago, there was another shooting across the street,” Thacker said. “So I figured they may possibly be trying to play a joke on him. But then when they came over and told me he got shot, I realized it was actually another shooting.”

“You know, it makes me feel a little uneasy, especially with young ‘uns running around,” neighbor William Hamblin said.

“It was bad. It was, like, really bad,” Hamblin’s 6-year-old granddaughter said.

Humboldt police say they are not searching for any other people in the shooting. The investigation is ongoing.