Community picks up after EF-1 tornado in Decatur County

DECATURVILLE, Tenn. — A long afternoon of storms Monday for many in West Tennessee was followed by a long day of cleaning up. 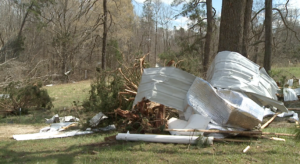 Debris from the EF-1 tornado are still scattered across a neighborhood in Decaturville as the community works together to pick up the pieces.

He said he knew it was serious after he saw a tree fall on his neighbor’s car.

“We could hear a woman screaming for help, so that initial panic was setting in,” he said.

EMA and cleanup crews flooded the neighborhood, located off of Campground Road, as soon as emergency calls came in.

“All night long, it’s been a steady flow of people coming in and out to help,” Alexander said. “It really has been remarkable.”

Sheriff Keith Byrd also came to assist with the cleanup.

“The potential was there to have some very bad injuries and fatalities,” Byrd said. “But none of that happened, and I am very thankful for that.”

Many residents said they believe it was a tornado that caused the damage, which was later confirmed by the National Weather Service.

Delores Cook said she was at work when her daughter sent her a photo of a possible funnel cloud right by her house.

“My daughter sent the photo to me, and it was right by my house where it started,” she said. “I was just like, ‘oh my God.'”

She says she’s grateful not only her home was spared but also her family. “Her and my granddaughter were headed home, and all I can say is the good Lord had to be with them, because I don’t know how they made it.”

Residents said even though this is a difficult time, the amount of support is bonding their community together.

Surveyors with the National Weather Service report the winds in the storm reached an estimated 110 miles per hour.