Decatur Co. residents prepare for another round of storms 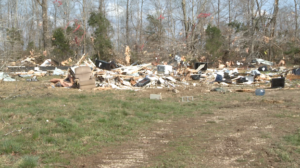 DECATURVILLE, Tenn– The roar of chainsaws filled the air as a residents along Brooksie-Thompson Road in Decatur County clear debris.

Just two days before an EF1 tornado with wind gusts up to 110 mph ripped through the town.

“I have been here since ’87 and this is the worse thing that has happened,” White said.

“I started out the door in the house and when I started out I heard a racket and I looked and the stuff was going down the porch,” White explained.

The wind from the storm was so strong that pieces of timber sit on top of tall trees in White’s yard after being blown around like tissue.

“I was lucky. My housetop didn’t get damaged,” White said.

Up the road, a New Testament Bible perched in a field of debris after a mobile home is wiped out. Neighbors said the owner was in the hospital during the storm and was released Tuesday morning with no home to return to.

“The best thing to do is like they tell you on the news and that’s get somewhere, get down and stay down until it’s over with,” White said.

But with the threat of yet another round of storms Thursday these storm victims are preparing to possibly get hit again.

“You don’t have very long to wait and in five minutes it will all be over with and be over with right quick, ” White described.

White said residents should invest in double pane windows. He said they helped save his life.

White said he believes repairing all the damage to his property will be quite costly.

Officials said luckily no injuries have been reported from the storm.