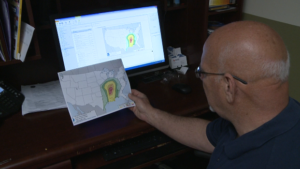 Severe weather season is upon us, and West Tennessee could face another round of potentially dangerous storms Thursday.

“There is a potential out there tomorrow and there are probably going to be some isolated cells that are going to be severe,” Obion County EMA Director Danny Jowers said. “That would include heavy rains, hail and possible tornado activity.”

He said they are keeping a close eye on the radar.

“The time that we will be looking at is morning for the first line of storms and they are saying the afternoon with the second line of storms,” he said.

Weakley County is also listed under the elevated risk, and officials are already calling in more help.

“We usually try to have extra people here, if not then on standby,” Weakley County 911 Supervisor Christy Fulcher said. “We get the radars all pulled up, get the stations ready for catastrophe weather.”

Officials said to take shelter when you hear a warning go out in your area, stay off the roads and be prepared to be without power.

“Don’t get out and drive,” Fulcher said. “If you have got plans to be somewhere, I would cancel them. Make sure that you have enough stuff to last that if the power were to go out for a few days to a week that you’ve got food, water, food supplies like that.”