TRENTON, Tenn. — At the end of 2017, funding from a federal grant will end, leaving the Gibson County fire chief concerned whether first responders in the department will be without a job. 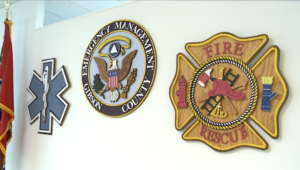 “It’ll just be me and whoever is off work that is medically trained to respond to daytime calls,” Gibson County Fire Chief Bryan Cathey said.

After two years of paying the salaries for eight Gibson County first responders, the federal grant money dries up in December, leaving the department without full-time firefighters and only volunteers to respond to emergencies.

“The county will either have to hire them as full-time employees — some of them, all of them, none of them — or we will not have anymore daytime firemen,” Chief Cathey said.

Although it will cost more than $200,000 a year to keep these medical responders, Chief Cathey says with the county’s population growing and aging, emergency calls have doubled during the day, with 50 percent being medical calls.

Without full-timers, he says medical response would be slower and helpful programs would end.

“We hung over 1,200 free smoke alarms last year. That program will go away,” Cathey said.

Cathey says he’s working on his budget proposal but knows losing some of his staff is a possibility.

“Everybody’s in a money crunch, and it’s strictly a money thing,” Cathey said. “It’s nothing personal.”

According to the Gibson County finance director, budget workshops will take place over three days in the last week of April. County commissioners typically approve the budget during their May meeting.