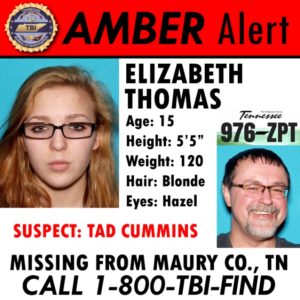 SHELBY COUNTY, Tenn. — The Tennessee Bureau of Investigation says a reported sighting in Collierville was not the subjects of a statewide Amber Alert.

A sighting reported Thursday in Collierville was not Tad Cummins and Elizabeth Thomas, according to TBI spokesman Josh DeVine.

Cummins, 50, is wanted in the disappearance of 15-year-old Elizabeth Thomas.

Cummins was formerly a teacher at the school in Maury County where Thomas was a student.

She was last seen March 13 in Columbia, Tenn. The Tennessee Bureau of Investigation issued a statewide Amber Alert the following day.

Cummins stands six feet tall, weighs about 200 pounds and has brown hair and eyes. He is believe to be armed with two handguns and driving a silver Nissan Rogue with Tennessee tag 976-ZPT.

Anyone with information in the case is urged to call 1-800-TBI-FIND.